EYEBROWS THROUGH TIMES: HOW EYEBROW TRENDS HAVE CHANGED

Trends change with the wind, and brows are no exception. Even though thick brows are trendy right now, it hasn’t always been like that. Let’s have a look at the history of brows!

Even though the main purpose of the eyebrow is to prevent sweat from dripping into your eyes, it’s become an essential and purposeful part of the face. The obsession with brows is not a new lust, eyebrows have been objects of fixation for thousands of years.

Let's go back in time, and have a look at the different trends

𓁙 ANCIENT EGYPT(3500 BC - 2500 BC).
Thick, bold brows were the style of choice for both men and women, which they achieved by using black oxide and carbon as both eyebrow and eye makeup.

🏛 ANCIENT GRECO-ROMAN EYEBROWS (800 BC - 476 AD)
In Ancient Rome and Greece, makeup reflected cultural values and was mainly focused on a women’s purity. Married woman left their eyebrows untouched, while the unwed woman would darken their eyebrows. Unibrows was also believed to be a sign of intelligence - which lead to many women drawing in faux hair, to give the appearance of a unibrow.

🧧 SHAVEN MEDIEVAL JAPANESE AND CHINESE EYEBROWS (600 AD - 800 AD)
A trend in China in 618 AD was to shave off the natural eyebrows, to make the full-face makeup easier. With the help of charred willow, they created brows with tails that drooped. Eyebrows held an important role for both men and women, telling their social status. Noblewomen in Japan shaved off their brows and pencilled new ones higher on the forehead.

👑 ELIZABETHAN ARISTOCRATIC HIGH BROWS (1558 AD - 1603 AD)
The higher the brow, the higher the social class. Elizabeth I set dozens of trends in fashion and beauty, such as high hairlines and high brows. Women would pick their brows thinner to give the illusion of a larger forehead. They even went as far as rubbing walnut oil on the eyebrows, in an attempt to thwart hair growth. 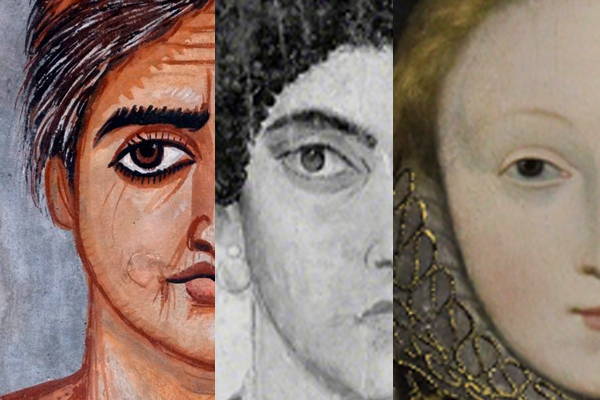 🐁 EYEBROW WIGS (18TH CENTURY)
At the beginning of the 18th century, transparent eyebrows were replaced with darker, fuller brows. Due to over-plucking and the use of toxic lead-based cosmetics, eyebrow wigs became popular. Women would trap mice for their fur and form it into artificial brows. The fur was trimmed into a desired style of eyebrow and stuck onto the forehead.

🎞 THE EFFECT OF THE CINEMA (1920S & 1930S)
The rise of the screen and Hollywoods biggest celebrities of course affected the people. Ladies like Clara Bow, Jean Harlow and Marlene Dietrich had a major impact on the eyebrow style in the 20s & 30s. Ultra-thin brows were back, either by shaving them all or over-plucking them. Vaseline was also popular to use on the brows, to create shine and draw attention.

🧹 WELCOME, HEAVY EYEBROWS! (1940S-1950S)
World War II had a widespread effect on the planet, in both big and small ways. It impacted the beauty and fashion industry, as women were now needed in the workplace and had less time for grooming while men were at war. This lead to women praising the low maintenance look, leading to thick eyebrows. Starting with Audrey Hepburn, the dramatically arched brows were not having a moment.

☮ HIPPIE EYEBROWS (THE 1960S & 1970S)
The happy 60’s brought a range of experimental trends. Old traditions were back in business, and shaving the eyebrows was back in fashion. Saloons even started eyebrow waxing. Hand in hand with the times, of course, you had it-girls that did not follow the rest, like Edie Sedgwick. She rocked her 15 minutes of fame with a beautiful pair of thick eyebrows.

💃 THE PEAK OF EYEBROW HISTORY (THE 1980S-1990S)
The bigger the better was the motto for the ’80s. Together with big hair, shoulder pads and long nails came big, beautiful brows. At the end of the decade, it seemed like people had enough of the over-the-top, and natural-looking brows became the main look on the runway, only to re-introduce skinny brows in the 90s.

🙌 THE WELL KNOWN 2000’S TREND AND 'THE BLESSING'
The late 90’s trend continued, and eyebrows were supposed to be skinny. With celebrities such as Angelina Jolie and Christina Aguilera in the front. 2010 was a turning point, and the tweezers were finally put down. The struggle became real when people tried to regrow their eyebrows, and tricks like brushing them up became handy, for the illusion of thicker brows. Due to the damage from the ’90s and early 2000s, balms, serums and microblading became popular. Instagram-eyebrows had their moment and is currently being replaced with brow soap and laminated brows.

🎢 EYEBROW TRENDS HAVE BEEN SHIFTING LIKE A ROLLERCOASTER SINCE BC.

Whether you want it or not, a naturally well-groomed brow will shape your face, regardless if you’re going for a natural appearance or full-on night-out makeup. However, as many of us followed a certain trend in the 2000s or simply are not blessed with the champagne problem of having to pluck the brows. Getting thick brows can be a struggle.

With the vegan and cruelty-free iGlow Brow Maximizer, your natural brow will grow in 6-14 weeks. Note - be patient. Introduce it to your daily routine, and in a couple of weeks, you will notice hair growth places you thought were long gone.
Sold out
Shop Now
Thank you!